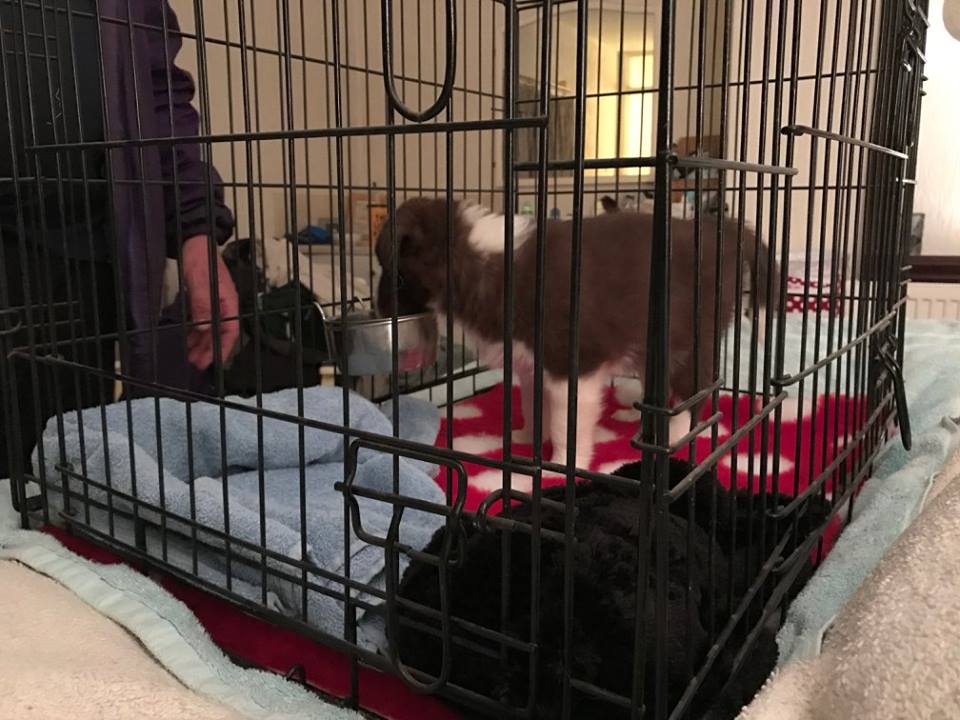 Check out my video Q&A below, along with my written advice for those who’d prefer to have a read instead.

At some point or another, your dog is likely to be confined in a crate. Here are some likely scenarios:

There are 3 main types of crates:

The type of crate I use depends on where I’m going to use it. I generally use a cheaper metal crate for use at home with my puppy training, and opt for heavier duty crating in my vehicle in order to ensure both the dogs and I are safe whilst travelling. There is a distinct difference in quality with metal crates, but you don’t always need the most expensive one – it really depends on the purpose you have in mind.

The plastic airline crate that I have was the one that Vodka travelled home from Italy in, and gets used for training games. These are generally more expensive that metal crates as they have to adhere to airline safety standards and are not so commonly used in the UK, though they are in other countries where flying your dog is more commonplace. It’s a useful crate for this purpose as when I throw treats into it, if they bounce (as they invariably do!) they don’t end up outside the crate like they quite often do when I use a metal crate.

Once I’m confident that my dog understands the rules I associate with their crate, then I will use a soft crate for use in training classes or when we are out and about. For dogs that struggle to settle in stimulating environments such as a training class, these can be ideal for providing a quiet spot to reduce the amount of visual stimulation which is overwhelming the dog.

They’re also a helpful pop up home from home when we stay away in hotels for agility competitions. Soft crates are much lighter to transport which is why they’re a helpful transition from metal or plastic crates.

Apart from preparing my dog for scenarios such as I’ve outlined above, I have also found crates to be a useful teaching aid for building self-control in both dogs and their humans! These come from creating and then maintaining the criteria of the following training rules.

Stages of Building Value for a Crate

This is the same process that I demonstrate with Toddy in the puppy course [W2: Home Life & Daily Routine – Bed]. The only difference I would recommend here is using something which doesn’t have sides to it and isn’t so squishy. Otherwise it can be harder for your dog to do some of the later stages of the training.

If you have a rescue dog who has negative associations with a crate because of long, lonely periods of confinement, then take care to spend a lot of time at this stage and don’t rush getting the bedding into the crate. This is an opportunity for you to build your dog’s confidence in you as a benevolent provider who listens to their concerns and takes things at their pace when they are worried. I have seen this provide huge benefits in building relationships with new owners as their dogs realise that they are with someone will keep them safe by listening to them J

Provided you’ve successfully shaped your dog onto the bedding, this next stage is relatively straight forward. Put the bedding completely into the crate and go through the same process as you did with the bedding. Some dogs may stall out a bit at the fact they have to move away from the rewards to earn them, but be patient and let them work things out for themselves.

A great way to make the crate a more inviting place to be, is to make it a place which holds lots of goodies – and somewhere that they can’t get into! To start with, scatter some yummy treats inside the crate and perhaps some chew toys too. Let your dog watch you do this. Then shut the crate door and move away slightly allowing them to investigate. If they start to scratch at the crate or whine, wander over and ask them if they need your help. If they can offer a Sit for please (remember our nice manners from their food bowl game), then open the door for them. But only if they can remain in the Sit whilst the door is opened and they stay there until you use your release word.

Straight after playing the Forbidden fruit! game is a good time to shut the door for the first time. Whilst they’re busy searching through the crate for their goodies, quietly close the door. When they’ve snuffled up their treats and start chewing on the other goodies, wander past and drop a few treats into the crate to land somewhere between their front paws. Your aim is to reward nice settled behaviour in the crate, so drop the treats where they can remain where they are when they land.

To build up duration inside a closed crate, we need to build up the dogs understanding that the crate is a pretty cool place to hang out. I would aim to start shutting the crate door when:

Initially I would have a magazine or a good book close by the crate, along with some extra treats, so that when I’ve just done stage 5 I can comfortably settle down near the crate. Every so often I would toss a few treats into the crate whilst the dog is chewing, without making a big fuss, ideally so the dog doesn’t notice they’ve come directly from me. If you want some help with this, an electronic treat dispenser like a ‘Treat & Train’ machine can be useful here.

Build up to walking in and out of the room where the crate is located, initially just briefly, but then so that you are going about your normal tasks.

I use the criteria laid out in Susan Garrett’s excellent Crate Games DVD for this next stage. Her crate rules are designed to help develop the dog’s self-control skills, but I have also found that they are useful for developing human observation skills too!

After using 10 treats or so, use your release word to ask the dog to move out of the crate. If they’ve grown very comfortable about remaining in the crate (which is normal!), simply close the crate door again, reopen and cue their release word again. In a training game like this, the closed crate door indicates that the dog made an incorrect choice and prompts them to offer something different the next time.

It is important to only say their release word ONCE the same as any cue, because we want them to understand their job without having to say things multiple times. Think of your recall word later on – wouldn’t you prefer to just say that once and have your dog return straight away then too?

The reason Susan likes dogs to do this is because if they go to move forward, because they are further back we won’t bang their noses as we shut the crate door if they try and move out of the crate before released. Obviously if they are pressing themselves up against the door of the crate, it is much easier for them to slip out quickly without having to do as they are asked!

Once you have played this stage a few times over a few different sessions, you can start to expect that you touching the crate door will cue the dog to Sit (without you having to use the word). Be patient with this – allow them to work out that it is sitting politely that earns them their release from the crate. This will pay dividends later!

They should remain in the Sit until they hear their release word or you ask them to do differently (such as a Down or other position).

For dogs that love to do be out of the crate in a training session doing whatever work is on offer, going back to their crate could potentially become a negative place to be brought back to and left.

However, Lynda Orton-Hill who is an instructor at Susan’s Say Yes training school in Canada, observed that Susan’s dogs never balked at being returned to their crates. Plus, they wouldn’t start barking as soon as they were left either.

The difference, when she questioned Susan about it, was that when Susan leaves her dogs she does what she calls an ‘Easter egg hunt!’. This is simply that when her dogs are put back into their crates, once they have got into the crate she throws in a handful of treats after them – at the same time exclaiming ‘Easter egg hunt!’ in an exciting voice. She is then able to leave the dogs cheerfully snuffling up their goodies whilst she leaves them to settle down. This has become something I do with my own dogs and have found that it works beautifully!

In a training scenario, I have observed that people often bring along crates and then shut their dogs into them – sometimes covering them with a blanket to stop the dog barking at the action.

An early experience of using my crate in a training session, made me rethink this and so provided you have worked through these stages, I would recommend the following:

There are dogs who benefit from the blanket being over their crate with the door open, as they find it easier to settle with the visual stimulation cut out by the blanket. So try things out and work out what works best for you and your dog.

The things that spring to mind here are the following:

Firstly, I think it’s important that if the dog is to remain in the crate for any longer than a couple of hour training session (where they would be in and out of the crate anyway) then the crate should be one where they can stand up with at least another couple of their own head room, and can lie out completely on one side with room around them. Even if they enjoy lying curled up in one corner of their crate, doing so for the whole night for example, isn’t ideal as they’re likely to end up feeling a bit cramped and sore in the morning.

Secondly, I think it’s reasonable to crate a puppy overnight providing the size of the crate is adequate as described above. My preference once the puppy is house trained and doesn’t destroy the house when left unattended, to leave them out of their crate overnight.

I would suggest that 4 hours is a maximum I would want to leave an adult dog (over 6 months old) without a toilet break (in or out of a crate), and if this was before another 4-hour stretch, then a good walk (30 – 60 minutes off lead running) would be required in this middle of this too. Of course there are likely to be the odd times where circumstances dictate longer/ less of an opportunity to walk, but this would be what I was aiming for as a maximum.

Lastly, water bowls are easily tipped over and whilst I’m sure my dogs don’t worry quite so much, a wet bed doesn’t seem like a lot of fun to me! Positioning a bowl which attaches to the crate to the side away from the door and other action of the house should avoid the dog knocking it over and water going everywhere. 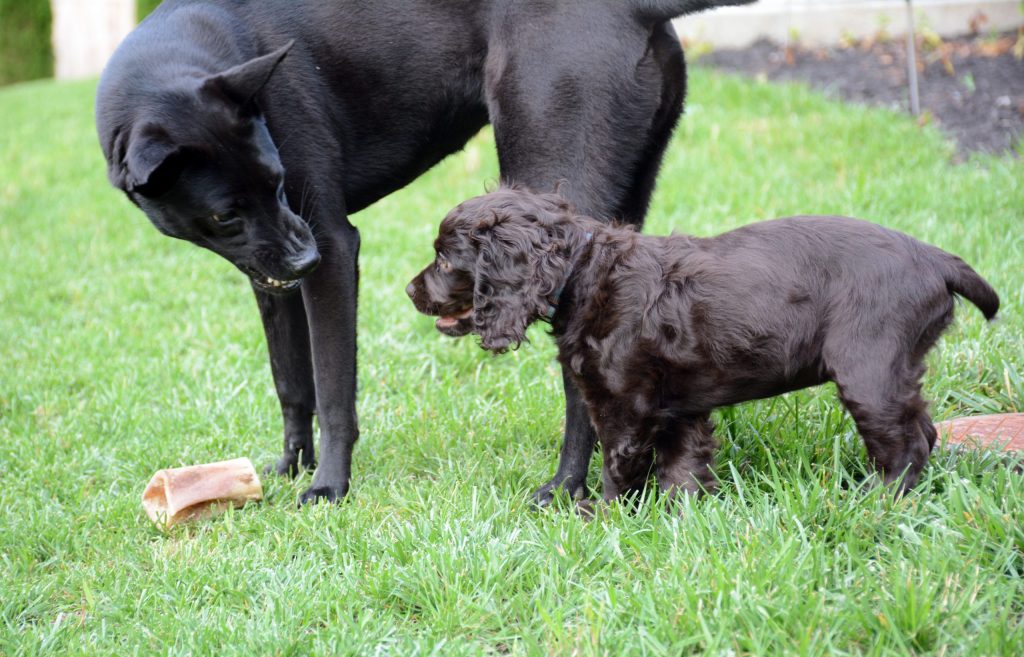